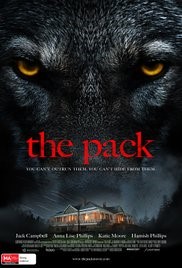 An Australian movie directed by Nick Robertson brought us to a tremendous horrifying night that happened to an animal lover family. The story begins with the discovery of the dead sheeps that apparently caused by the attack of wild animals. Curious about what happened to his sheeps, Adam (jack Campbell) tried to catch the animals by lurking around the woods, but he found nothing. On one night, Ollie, their dog sneaked out to the woods and swallowed by the dark. Adam once again tried to find it’s presence, however he didn’t any traces of his dog but he did notice a presence whom watching him beyond the trees, horrified by the possibility of the wild animals attack, he ran to his house and informed the circumstance to his family. Little did he know that his anxiety has become a reality since the roof they’re living under has already surrounded by a pack of wild wolves. Will they able to run away and safe their lives?

If you are a fan of a thriller movie then you must check this one out because Robertson managed to wrap this up horrifyingly by the fact that things that you’ve always thought impossible to happen is actually possible in so many ways. This movie will make you more aware by the presence of wild animals that are bothered by the existence of human around them, especially because they started to lose their paradise little by little caused by human greed. Hence, are you ready to see the bad wolves?

This review are written by the cooperation between Movietrax of RTC UI FM with Cinemania Indonesia.